It’s always best to start a discussion about a thing with maybe understanding that thing – since we’re talking about the movie, Gaslight, that means talking about the plot of Gaslight.  Except, you probably already know the plot of Gaslight because if you know the term ‘gaslighting’, you can guess exactly what a movie called Gaslight is about.  But if you haven’t, I’ll lay it out for you—

Paula (Bergman) is newlywed to a very charming man (Boyer).  After the wedding they move off to London to live in her Aunt’s house.  Not to live with the Aunt, but to live in the house.  You see, the Aunt was once famous singer who, years ago, was murdered in the house while Paula was also on the premises[1].  After the move, slowly but surely Paula is led to believe she’s going mad but, in truth, she’s really being manipulated by her new husband, who – SPOILER ALERT – is the Aunt’s murderer.  Moreover, the reason he killed the Aunt was to get back some jewels, which he never found, and which, after he finishes up driving Paula mad and shipping her off to some asylum, he’s going to properly search the house for the jewels.

In short, Gaslight is about a man who tries to drive his wife insane by convincing her she’s insane.

Given its pedigree – nominated for Best Picture, an Oscar win for Best Actress (Bergman), on top of two other acting noms (Boyer and Landsbury), as well as inventing the term ‘gaslighting’ – you’d be inclined to think the film is a classic.  Or, at least a near-classic.  And it would be, save one little thing—

Except there’s a reason most movies don’t win Best Picture.  It’s because they’re not very good.

What’s Not Good About It?

A lot is not good about it, actually.  Straight from the top, it’s too long – too long and too methodical.  And in order to explain my thoughts on the former, I need to start with the latter.

If one end of the narrative spectrum is the free-forminess of Terrence Malick, and the other end is the Dick Wolf type of strict, formulaic procedural, Gaslight shades far-too-close to Dick Wolf territory for my liking.  To be fair, being a procedural is not necessarily a bad thing, if you’ve got a solid plot and details to back it up – see any episode of Law and Order for examples.  However, when a film like Gaslight is forced into procedural territory, and the details are examined, it begins to crumble and seem ridiculous.  After all, even a cursory look at these people’s lives would reveal the plot – or the general weirdness of what’s going on – in a matter of moments.  For instance, when Paula has a little bit of an episode at a music show, in real life somebody would have come over with a, “You all right girl?” and before long the jig would be up. Or the nosy neighbor would get a peek and things and start asking questions and the house of cards crumbles.

My point here is not to slag procedurals, it’s to say that for a movie like Gaslight to be successful, it has to go the other way, aiming to for impressionistic and ethereal – a certain air of unapproachable mystery is its friend.

In short, Gaslight suffers by being how it’s about what it’s about and winds up being overlong in the serving of the how.

All right, so it’s too long – check.  Second, the ending sucks – no, not the ending, the climax.  The extended climax.

You see, in the film, the husband’s plot against his wife is unraveled by a nosy inspector from Scotland Yard who—

, where he made no real impression on me.  Coming into Gaslight, then, I had no expectations of him and, fair to say, he exceeded them.  Boyer brought just the right amount of charm, insinuation and control needed to be believable as both the doting husband and the calculating-sinister creep.

Good as they are, though, Angela Landsbury is the real revelation.  If you’ve only known her as the matronly witch in Bedknobs and Broomsticks, or the sixtyish sleuth in Murder She Wrote, or as the traitorous-mother in the Manchurian Candidate, then you only know her as playing a bit of a dowdy middle-to-advancing age woman and missed out on the fact that in Gaslight, she is seriously sexy – almost insanely sexy.  I dare you – I double-dog-dare-you – to watch her later scenes, where she effortlessly flirts her way around Boyer, and not feel a little bit of heat under the collar.  Because unless you’re dead, she’s definitely going to make you feel. 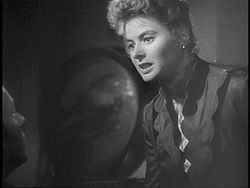 A Note On Accents

The film is another in a long line of old films that don’t bother to offer verisimilitude or even consistency amongst the accents – despite the character being British, Joseph Cotton doesn’t use an English accent and, despite seemingly being raised in England, then Italy, Bergman uses her natural, Swedish accent.  Whenever I see this in a film I’m always curious about when consistency and verisimilitude of accents became the norm and why didn’t they bother with it from the beginning.

Going My Way won Best Picture of 1944, so the question is: Is Gaslight better than Going My Way?  To answer that, I merely shrug, because the plain truth is I wouldn’t watch either of them again.  But, if I was going to watch one, it’d be Going My Way, which has Barry Fitzgerald, who is utterly charming.

Anyway, if I had my druthers, I’d look to the film I picked when I did my piece on Going My Way for my Best Picture Project:  Double Indemnity.

[1] FYI, Paula was not a serious suspect in the murder, which went unsolved.

[2] This happened after digging into the archives of the Filmspotting podcast, which did an Ophuls marathon some time back that inspired me to consider the work of a director I’d never experienced before.