Screenplay by Nick Hornby, based up the book by Lynn Barber

The year 2009 was the first year in something like six decades in which the Best Picture race saw more than five nominees – that year, the Academy expanded the field to 10.   Later, the rules were changed to allow for more than five nominees, but capped the number at ten, leading to years with only eight or nine nominees got in the race.

(As an aside, looking at the nominees for 2009, I can’t help wondering if the Academy realized an unworthy film or two snuck onto the list because they expanded the field and that, maybe it wouldn’t be a bad thing to thin the herd in the future, so to speak[1].)

The Hurt Locker (Your Winner)

Precious: Based on the Novel ‘Push’ by Sapphire

Up In the Air 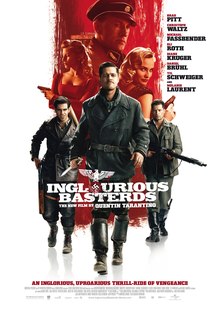 Going into An Education I’d seen seven of the nominees (The Hurt Locker, Avatar, District 9, Inglorious Basterds, Precious: Based on the Novel ‘Push’ by Sapphire, Up and Up In the Air).  At the time, I called District 9 my Best Picture – if you find the Hurt Locker entry on this site and do a ‘ctrl f’ for ‘District 9’, you’ll see exactly where I said it, rating The Hurt Locker below both District 9 and Inglorious Basterds.  Five years on, and having a bit more time to process and ponder and what have you, I think I’d still keep The Hurt Locker below Basterds, but District 9 would probably slide behind the both of them.  At the time I think I rated District 9 higher because it was refreshing to see a strange genre film get in the race – probably the benefit of the expanded field – and wanted to give it love.  Now, though, I’m a bit more clear-headed about it and find Inglorious Basterds more worthy – it’s audacious film, takes many risks other films shy away from, plays with the art form, is funny and just downright entertaining.

So, given I’d already changed my mind about 2009 once, there was always the possibility An Education might change it again, that somehow I’d find An Education an undiscovered gem – as undiscovered a gem as a Best Picture nominee can be – that’d disrupt everything I’d previously held true.

Alas, it did not. 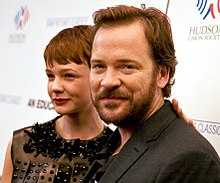 An Education is the story of a 16-year-old British schoolgirl (Carey Mulligan) in 1961, seduced by an older, charming con man (Peter Sarsgaard) and nearly derails her education and plans for the future because she falls for him.  And so charming is he, and so cunning, that not only does she fall for him, but he manages to make her parents (Alfred Molina, as the father) complicit in the seduction because they basically fall for him, too.  In the end, when the truth is revealed, the girl matures and learns life lessons and…and realizes she’s had An Education.

Reading the preamble above, about how the film only snuck into the Best Picture race by virtue of the expanded field, and also about how the film would be forgotten if not for the nomination, you can already guess where I’m going with this.  Is it any good?  No.  But to be fair, it’s not bad, either.  It and inoffensive, bland, shoulder-shrug of a movie.  And because it’s a shoulder-shrug of a movie, it’s hard to eviscerate it to any degree because I can’t really work up much ire.  It did nothing spectacularly right, nor did it do anything horribly wrong.  It just punched a time clock, did it’s shift without fuss, and went home.

To be fair, though, I do have two criticisms:

How About The Actors? 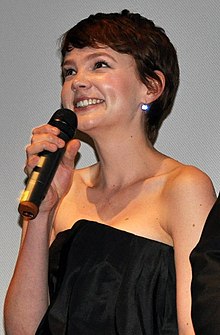 Carey Mulligan is the star of this show as the schoolgirl and, sad to say, is incredibly blah.  Frankly, I’ve never been wowed by her[3].  I was hoping that for a film in which she was nominated for an Oscar[4], I’d get something a little…better?  Dynamic?

But here, as she was in Never Let Me Go, she neither moves, nor engages me[5].  Rather, she’s like inoffensive wallpaper – you don’t hate it when it’s hung on the wall, because it’s hard to hate inoffensive things, but it’s also something you never get passionate about and would gladly change if you had the chance.  But, because it doesn’t drive you crazy with hate, you’re in no real rush to get it done.    And that might be the most damning truth I can render about Carey Mulligan – she excels at being inoffensive. 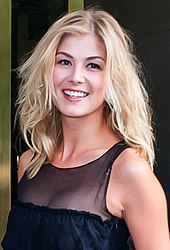 Part of Mulligan’s problem here, though, is Rosamund Pike is in the film, too.  Sure, Pike has the showier character to play so it’s definitely apples and oranges, but still.   Just because Pike gets to be emotionally all over the place – because her character in the film knows the underlying truth of it all and doesn’t know how to process it, leading to emotional incosistency – doesn’t mean Mulligan can’t make her dewy-innocence more moving.  She doesn’t have to be overshadowed.

Consider this, Emma Thompson shows up for two scenes simply to play a one-note character – the disapproving schoolmarm.  And though she doesn’t scream or shout or raise her voice at all, she is electric.  She owns the screen!  Sadly, in the glow of Thompson’s and Pike’s sunshine, Mulligan withers.

Something to Ponder: Peter Sarsgaard and the Accent

It’s common in America for reviewers to comment on the authenticity of the accents in films, specifically the American accents used by non-American’s/Canadians – bluntly, the American accents of British actors.  Usually, the gripe is that the sound is too clean and clipped and perfect and therefore, because there’s no slushiness or mush-mouthedness to it, it doesn’t sound genuine.  See, for example Jamie Dornan in Fifty Shades of Grey[6].  In An Education, Peter Sarsgaard adopts a British accent and being American, I have no way of knowing if it’s even remotely genuine –even terrible British accents sound genuine to most all of us over here.  That being said, his accent got me thinking about whether or not people from other countries complain about the accents of American actors trying to pull off their local dialect.  Yes, historically, I know Dick Van Dyke was ridiculed for his very broad accent in Mary Poppins, so it’s definitely happened before.  But, if you want proof of what American’s will accept as being a good British accent, understand that as a kid, and really even today, I still think Van Dyke’s accent is pretty spot-on.  But what do I know?  I’m an American!

Anyway, a quick Google search confirmed that, yes, critics on the other side of the world do gripe about such things.  While The Village Voice called it ‘passable’ in their review[7], while The Guardian called it ‘slowish [and], carefully enunciated’ and did not mean either of those in a good way.  Though, to be fair, they did think the accent weirdness appropriate for the character, as it made him seem even more of the creep.

Should This Also Ran Have Been The Winner?

Coming into this episode of The Also Rans, I’d seen seven of the 2009 Best Picture nominees, and now I’ve seen eight.  Of those eight, An Education is easily the eighth best film on the list, falling even below Pixar’s Up, which, sacrilege as it might be, aside from the opening sequences, is a movie I found dreadful.

[1] This mention of thinning the herd is what I like to call ‘foreshadowing’.

[2] To be fair, the film was clearly better received in Britain, nominated for 9  BAFTA’s, though winning only one, for Carey Mulligan as Best Actress.

[3] She’s probably best used in Drive, but that’s only because she’s basically meant to play a wounded bird who needs help.  Also, she’s like the green beans in a meal where Ryan Gosling is the salmon.

[5] Nor did I find her all that engaging in The Great Gatsby, but I refuse to hold that against her as I simply did not care for the source material on that one, or the movie.

[6] Please, look at the article and search for ‘accent’.  Also, watch this video and listen to the way he says ‘incapable.’  It’s too…perfect.  Nobody in American speaks that way.  You can also listen to The Flophouse episode on Fifty Shades of Gray for a great discussion of the accent.  In general, you should ALWAYS listen to The Flophouse podcast.

[7] If you need further proof of my point, remember that The Village Voice is an American rag, so of course they found it passable.