A Quick Jaunt to Nashville…

Last week, as a bit of a Spring Break trip, my family and I hopped on down to Nashville to see the U.S. national team play Paraguay – that was in soccer , for those unfamiliar.  While the outcome of the game was a bit of a bummer – Paraguay caught a  lucky goal and then parked the bus in front of the net the rest of the game, leading to an otherwise dreary 1-0 score line – it actually was pretty well-played by the U.S., except for a decided lack of finishing.

Along the way we stopped for some great food at Neely’s Bar-B-Que – I say it was great because, well, I’m not normally a rib person, and I thought the ribs were marvelous.  I also figured, whilst we were in Nashville seeing some other sights, it wouldn’t be a bad idea to visit a couple local landmarks that made memorable appearances in Hollywood over the years.

t stop of the 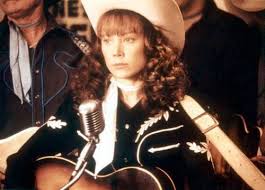 Nashville/Hollywood tour, was the Ryman Auditorium.  The home of country music has been host to hundreds of influential artists over the years, including Loretta Lynn and in the movie about Ms. Lynn, Coal Miner’s Daughter, we see her perform memorably on the Grand Ole Opry, fulfilling one of her ambitions.  Better, the actual stage that Ms. Lynn first played on – and Sissy Spacek later performed on as Ms. Lynn – was used in the movie and for a few dollars any idiot could get up on stage and have their picture taken.

While I don’t have a good photo of that event from the film – if anybody does, I’d take ’em – I did manage to get several good shots of, and from, the famous stage.  On of the better moments of the tour of the auditorium was sitting fairly high up in the balcony and watching some random tourist have their picture taken on stage and in the middle of it start belting out some song that, even though we were well away from her, could be heard loud and clear.  Either she had really good pipes, or the acoustics in the building were amazing.

By the way, don’t bother with the backstage tour.  The dressing rooms are recent additions – not historic – and nowhere near worth the extra expense.  About the only thing worth seeing from backstage is across the stage itself, which you can pretty much see without going backstage.

Afterwards we wandered down Honky Tonk Row, a pretty impressive stretch of clubs and music venues.  Unfortunately, I didn’t think of getting any photos of the famous road.

The second stop made was at The Parthenon, located in Millenium Park.  Once constructed for the Tennessee Centennial Exposition, The Parthenon has become a massive local landmark, and even though it isn’t made of marble or other ancient materials – it’s concrete and pebbles – it was still pretty impressive, even though it’s now dwarfed by pretty much every other building in Nashville.

Well, obviously Robert Altman thought the landmark was impressive as well, because he staged the climax of his movie, Nashville, on the steps of The Parthenon.  Of lesser note, the structure is also to have appeared in Percy Jackson & The Olympians, but I didn’t bother taking that film in, and will just have to take the internets word for it.

Visiting the site, I found it a little one note – sure, there’s a museum inside, but I wasn’t interested in that.  Still, it was cool to tread upon the same structure where Barbara Jean was killed by a deranged fan at a Hal Phillip Walker rally.

Curiously, while one could easily make a whole trip of trying to track down all the locations of Nashville, the movie, I didn’t, preferring to leave visiting Opryland and the like for another time.  The same can be said for Hendersonville, and Johnny Cash’s home – which actually no longer exists, but still.  Either way, with only two days in town, there was no time to see much more.

On the drive back, though, we went through Elizabethtown, namesake of the terrible Cameron Crowe movie.  We stopped for lunch just off the highway and I shot some photos down towards the town.  I figured, since I didn’t like the movie, and can remember nothing of the landmarks therein, I’m under no obligation to get any closer than this.

Back soon with another entry in the Best Picture Project…