The Deer Hunter might be the darkest film to ever win Best Picture, and if not the darkest, then at least the bleakest.  Certainly, over the years the Academy has recognized pictures that were not of the sunniest disposition – after all, Hamlet is several hours of brooding, followed by Hamlet’s death – but on the whole, the Academy has shown a decided tendency towards films that could either be called heartwarming, uplifting, or hopeful.  Think about Gigi, Around the World in 80 Days, Rocky, et al.  And even some of the darkest to win Best Picture haven’t been all that dark.

Oliver!, for all its abused orphans, theft, murder, and assorted what have you, was a singing and dancing spectacle in which the main character is eventually revealed to be the heir to a great fortune.  The Godfather is full of murder and other morally reprehensible behavoirs, but it’s murders are done for vengeance, not for profit, and are therefore wholly righteous.  Besides, in that film the killed are often far worse as human beings than the killers.  Ordinary People ends with the realization that life goes on and there’s hope in that.  Even Silence of the Lambs, rife with cannibalism, ends on a triumphant tone.  Sure, Lecter gets away, but Clarice has closure on her youth, and the real bad guy, Buffalo Bill, is taken out of commission.

The Deer Hunter, though, represents a fairly intense digression from this preference.  There is no uplift at the end and there really is no hope.  All you have is the suicide of one of the protagonists leaving the remaining protagonists to rue their shattered lives.   In the hands of another writer or director, the film might have ended with some statement on the futility of war, or the beatify of peace, or that loves conquers all – nothing that would give you something to cling to.  We don’t even get a sense that one day the nobility of a life of quiet desperation will pay off with some greater reward.  No, in the hands of this director, Michael Cimino, we get nothing but a movie about three blue-collar stiffs from steel country joining the army for unstated reasons, only to have their lives ultimately torn apart by it.  Hardly what I would call good times.

Still, it’s hard not to marvel at what The Deer Hunter accomplishes.  In setting out two make a two hour movie, prefaced with a one hour wedding sequence – getting a three hour film made is never an easy task – Cimino complicated the problem by making that movie about the Vietnam War at a time when the war was a largely untouchable subject.  About the only film on the subject before The Deer Hunter was John Wayne’s The Green Berets, which in John Wayne’s hands is less a movie about Vietnam than about John Wayne the hero.

That the War later went through a renaissance at the movies didn’t help get The Deer Hunter made, but is clearly a legacy of that film.  Before The Deer Hunter you had The Green Berets and some movies that were incidentally set in the country – notably The Quiet American.  Afterwards you had Apocalypse Now, Platoon, Full Metal Jacket, Hamburger Hill, and Born on the Fourth of July all coming out, many to great acclaim, and many to Academy Awards.  It is doubtful any of these films would have seen the light of day in their current form but for the trailblazing of The Deer Hunter.  (Yes, Coming Home appeared the same year, which certainly helped, but since most Vietnam movies to come after it bear a greater resemblance to The Deer Hunter than Coming Home, it’s easier to guess which was more influential.)

In a sense The Deer Hunter is a giant monument to the director’s balls.  Without him as a driving force, and without some creative management with his producers – he told them the wedding would last twenty minutes, when it wound up nearing an hour – we might not even have the film we see.  For sure chutzpah alone, Michael Cimino deserves major kudos.  But just as it is a monument to his balls, it’s also the exact point where his downfall begins.  Cimino’s follow up to The Deer Hunter was Heaven’s Gate, a film so ubiquitous in the annals of critical and financial failure it needs no real explanation other than a reminder that the film was so bloated it basically bankrupted a movie studio.  That Cimino could have gotten a chance to do what he did with Heaven’s Gate can all be traced to putting his ego on the line for The Deer Hunter – untouchable subject, unseemly cost overruns – and winning the Oscar for his troubles.  The only difference is that, where everything came up right with The Deer Hunter, it went wrong with Heaven’s Gate.  Cimino’s career never recovered.

For all its influence, and controversy at the time of release – specifically over the issue of the use of Russian Roulette in the film – it’s difficult to pin down the politics of the film.  Certainly, there are things that can be read as right-wing, or hawkish, in nature.  It’s a bit fascist in its portrayal of the Vietnamese as basically amoral demons, there’s macho-jingoism to spare at points, and the glory of hunting is pervasive.  But as right-wing as it is, the film doesn’t glorify war, doesn’t glorify violence.  In fact, it abhors violence, a decidedly liberal notion.  Never mind that it focuses more on the fact that war isn’t uplifting to those who fought it, but it inherently damaging.  In the end, the film plays less like a film of The Hurt Locker’s caliber, which eschews politics at every turn, but more like a deranged neighbor that embraces everything.

Nevertheless – great movie, not great movie – I can’t help but think in a different year The Deer Hunter wouldn’t have won anything.  That’s not to say it’s a bad movie, it’s just that through a combination of the Academy being ripe to recognize the subject – Vietnam – and an otherwise weak film year, The Deer Hunter triumphed.  But one shouldn’t begrudge it some luck on its way to success, because luck is a very wonderful thing.

As an aside, there were times watching the movie, particularly during the hunting sequences, when there would be a lovely shot of scenery, with music and vocals soaring over it, when I thought, that’s a shot straight out of Werner Herzog – the 70s Werner Herzog, when he still made great films, and not crap with Nicholas Cage.  Of course, this lead me down the rabbit hole to ponder the alternate universe The Deer Hunter as directed by Werner Herzog and starring Klaus Kinski, Isabelle Adjani, Bruno S., and scored by Popul Vuh. 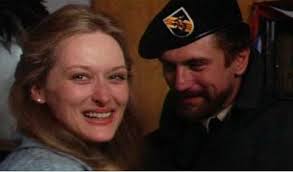