Watch This, Not That: A Christmas Carol

Unless you’ve been living under a rock the past couple of weeks, or just conveniently ignored the tinsel and tree-lightings and hordes of insane shoppers at the mall, you’ve figured out we’re coming up on Christmas, that annual holiday that hardcore Christians – there are more than a few in my family – want to reclaim from the secular world, and get everybody to say Merry Christmas instead of Happy Holidays, but which the rest of us consumers don’t see as any way religious.  It’s a time when most of us want to splurge on ourselves, not wonder if baby Jesus really was born on December 25.

This is also the time of year when people turn to a certain handful of movies that, because they are Christmas oriented, don’t seem appropriate to watch at other times of the years.  Sometimes I wonder if anybody would even remember any of these movies if it weren’t for network and cable TV dusting them off every year for a movie marathon that runs right up until the big day.  Practically every night you get to choose between the old classics, Miracle on 34th Street and It’s  A Wonderful Life, and such new classics as A Christmas Story – 24 hours worth of it on TBS – and Elf.

It’s A Wonderful Life has always been my personal favorite.  I usually watch it a couple times throughout the holidays, with the final viewing coming Christmas Eve night, right after the kids have gone to bed.  The past couple of years, though, I’ve really gotten into A Christmas Carol, starring Alistair Sim.  Known in England – and on the title cards of my DVD – as Scrooge, despite DVD cover art proclaiming it A Christmas Carol, I first became aware of the film through an Alternate Oscars book I bought as a remainder years ago, in which the author declared Alistair Sim the best actor of 1951 over Bogie in The African Queen.  Having seen both films, this might be a wise choice.

While I might have been aware of the film for several years – Alternate Oscars only covered the races up to 1991, when it awarded Wesley Snipes best actor for New Jack City – it was only the Christmas before last that I bought the Alistair Sim Christmas Carol/Scrooge on DVD.  Once I had it, though, I loved it immediately.  It has everything you could possibly want in a Christmas Story.  It has pathos and menace, sadness and regret, with a nice touch of humor, both black and otherwise, to get one through.  It’s dark when it should be, but light as well, and at the end you get a real sense of transformation in Scrooge, and a sense of uplift.  In a word, the film feels authentic, and every time I’ve watched it since then, I’ve never had even the slightest of cynical reactions.

Fast forward to a couple weeks ago when, flipping around TCM ,I caught the beginning of the 1938 version of A Christmas Carol, starring Reginald Owen as Ebenezer Scrooge.  Though I wasn’t able to take in the whole film at that time I caught enough that I went ahead and bought it from my favorite movie and book site so that I could answer, for myself, which version was the best.

Now, I know somebody out there is thinking, “These aren’t the only two versions of this film, so why stick with them alone?”  And the answer is that, yes, there are other versions.  Among others there is the Bill Murray vehicle, Scrooged and Disney’s Mickey’s Christmas Carol.  However, Scrooged gets rejected simply because I’ve always found it too manic and mean-spirited, and Mickey’s Christmas Carol gets rejected because, while I like it, it’s more a novelty than anything else.  It’s easy to discard them because they simply cannot compare.

As an aside, I’m sure somebody else is thinking I’m overlooking the 1935 version of this film, also called Scrooge, starring Seymour Hicks.  However, I’m not.  Even so, I refuse to give it any attention for the fact that, unlike other takes on the story, the Seymour Hicks version can be found as an extra on my DVD of the Alistair Sim A Christmas Carol/Scrooge.  Perhaps I’m being a little elitist but I just couldn’t take a film seriously when it was left to suffer the indignity of being a special feature on some other disc. It’s no shock when I tell you both versions tell essentially the same story, from scripts that are much the same.  In both versions Scrooge is visited by his dead partner, has run-ins with three spirits, and changes his evil ways.  Both versions also share many choice lines – for example Scrooge’s lines “Are there no workhouses?  Are there no prisons?” appear in both, lifted nearly verbatim from the source material.  That they would have much in common is to be expected when remembering the fact that the source material was a slim volume – there’s not much story in the original to choose from which, at 28,000 words is nearly 1/5 the length of that dreadful Twilight novel.  Without much to choose from it’s expected they would be similar, with the only real difference coming in those scenes of Sim’s Scrooge meeting his partner Marley and showing crass opportunism and greed in running a competitor out of business when his embezzlement is exposed.

But if ever there was an example of just how the choice of director or actors can impact a movie, these two are it.  It you assume each tells virtually the same story, the difference can only be accounted by how they are stage and play and we get a unique opportunity to see how two things so similar can be so different.  For another example, see Psycho (1960), versus Psycho (1998).

Seeing the two of them so close together in time, it’s clear that Sim’s version is the superior film.   It feels more authentic to the time period the story takes place in – everybody in the 1938 version seems too well-dressed and the streets of London too clean for the early 1800s.  The supporting players are all better, especially Brian Worth, as Scrooge’s nephew Fred.  The only performances in the earlier version that stick at all are Gene Lockhart as Cratchit, who is all the more heartbreaking than Mervyn John’s ever was, and Terry Kilburn as Tiny Tim.

But really, whatever the technical differences may be, and no matter how the background actors may add to the story, A Christmas Carol will always live and die with Scrooge. 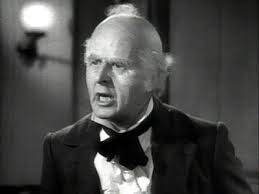 Reginald Owen plays Scrooge in the 1938 version and his casting was something of an afterthought.  Originally, Lionel Barrymore was to have played the role, but a broken hip and the need to maintain a production schedule ruled him out and paved the way for Owen to step in and be the star.  Except, there’s a reason Owen wasn’t first choice.  Where Barrymore would have brought some real skill and flavor to the role – he was, after all, an Academy Award winner for A Free Soul and would later star as Henry F. Potter in some other holiday classic – Owen is fairly one note.  He’s irascible as hell throughout, mostly gruff in all scenes, with the only real difference in his performance from beginning to end being that, in beginning of the film he tends to spend the time scowling, while at the end he smiles.  Otherwise, his performance seems to be the same from beginning to end, without much inflection in his voice, and without a hint of the change Scrooge must go through – at the end he doesn’t seem reformed, he seems like he’s lost his marbles.  To put it simply, I don’t believe his Scrooge changed at all and it’s not surprising that after this film Owen went back to being a supporting player, where he belonged. 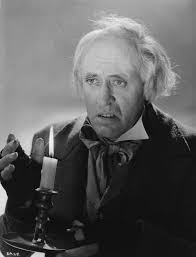 Alistair Sim, in opposition, is magnificent.  His Scrooge doesn’t seem merely crotchety – like Owen’s – his seems truly menacing.  He doesn’t play every scene with the same sort of yelling, or manic loudness Owen does, but invests the role with subtlety, with humanization.  To see the difference between their performances watch the way both play the scenes at the beginning, with the charity collectors and Scrooges interaction with Bob Cratchet, and also at the end when Scrooge sends the boy to buy the goose.  The scenes in both films are virtually identical – at least on the page – but while Owen is blustery and kind of a dick in all three, Sim is controlled, feeling no need to shout his misanthropy.  In essence, he looks as if he’s living the part, which is something Owen does not do.

It’s obvious that my recommendation is to watch the Alistair Sim version first, the Owen version second, and only if you fancy yourself some sort of completist.

But if you don’t take my word for it, take the words of my wife.  I watched both films within four days of one another, with my wife hanging around all the time.  About midway through the 1938 version – which was watched second – she made mention that she didn’t like it as much as the Sim version.  Given that she doesn’t normally comment on films at all – she’s mostly blah about movies – this was a remarkable statement from her.  More remarkable was at the end of the film she made sure to say it again.  When I limped to a half-hearted defense of the Owen version, saying, “It’s not that bad, it’s just a different telling of the same story,” she upped the ante on her criticism, saying she flat out hated it.  In a strange, backward way, that she hated one film and actually seemed to like the other – maybe like is too strong a word – is about the greatest compliment my wife could ever give a movie.