The Best Picture Project – Mutiny On The Bounty (1935)

From the Charles Nordhoff and James Norman Hall novel

Mutiny on the Bounty is a strange film for me.  I really like it, but I wouldn’t say I love it.  I know it’s good, but I also don’t think it’s great – or maybe superb is the better word.  It is definitely rousing, in bits, and the drama is dramatic, and the native girls are lovely.  The performances are good, but can be a bit hammy – Charles Laughton especially.  And when it’s on TV, I watch it, but with less-than rapt attention.  What makes it strange is that for all its faults, I don’t find it tedious in the slightest, nor terribly long.  For all the reasons to hate it, I don’t hate it, yet I don’t especially love it.

In terms of the The Best Picture Project, being in that middle ground makes it something of an orphan.  If it were wonderful I would gladly gush and genuflect before it and fill page after page with love.  If it were terrible I would sharpen my knives and eviscerate, waxing horrible for pages on end.  But because it’s one of those in-between films that I neither love nor hate and so have a hard time working up much in the way of passion for, even though I sincerely eat up every word Charles Laughton spits.  See below for one of his best scenes. 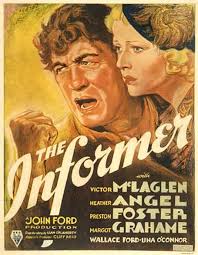 Perhaps I’m not really alone in this assessment of the film – I think the Academy might have even agreed with me.  After all, while Mutiny on the Bounty was the Best Picture winner of 1935, it took no other awards from its eight nominations – granted, three of those noms were in the same category, cancelling one another out.  But still, in four of the other five categories it lost in, it fell to John Ford’s The Informer, including the in the directing and screenplay categories.  Given the fact that Mutiny on the Bounty couldn’t rate any other wins it looks like a mistake that it won Best Picture.*  And perhaps it was, perhaps The Informer was the better nominated film – everybody sure loves there John Ford – but I wouldn’t know.  I haven’t yet seen The Informer and cannot make an informed decision.  Pun intended.

What I can say is that while the film may or may not be the best film amongst those nominated, it was not the best film of 1935.  That distinction belongs to a popular little film by Alfred Hitchcock, The 39 Steps.  Starring Robert Donat as a man on the run in a desperate attempt to prove his innocence from a charge of murder – kind of sounds like a lot of other Hitchcock films, particularly North By Northwest, if you ask me – The 39 Steps is a far more deserving film than any of the rest, and far more memorable, and sadly must join that ever growing stable of films that were overlooked in their own time.  Shortly it would be followed by Citizen Kane.

Mutiny on the Bounty has the distinction of being the film to produce the most best actor nominations for a single film, at three.  However, part of this distinction must be explained as being the result of a quirk in the Academy Awards at that time.  As of 1935 there were no Supporting Actor or Actresses categories – they didn’t appear until the following year.  If there had been then certainly Franchot Tone would have rightfully been downgraded into one of those, and likely would have won.  In addition, if he was out of the Best Actor race it’s conceivable to think that  The Informer star, Victor McLaglen, the winner in 1935, would have been an also ran, as Tone wouldn’t have been around to split the vote and deprive all of Mutiny’s star’s Oscar glory.  Instead, we might well have seen Charles Laughton take Oscar number two, cementing his place as one of the great stars in film history.

*For more info on this, see my Little Winner’s post, about Best Pictures that could hardly rate any other Awards.